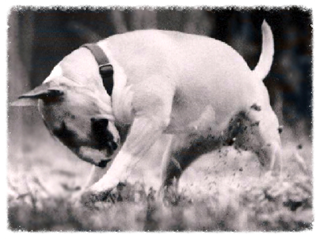 While Tom was in his first year of Vet school, he made the decision he had waited long enough and wanted to buy a Bull Terrier. We found out this was not an easy task. Even with Don Adams as our mentor, no one would sell us a dog because we were both in college and not married. Tom looked again in the back of the Bull Terrier Quarterly magazine and called the contact for the Bull Terrier Confederacy of the South East, Charlie Fleming. Mr. Fleming was very nice and directed us to a breeder in Louisville, KY he felt would be sympathetic to our situation and place a dog with us. So he made the phone call and in a short time we did have our first Bull Terrier, Mr. Ned, AKA Indian Trail Glentom’s Opener. Ned was sired by the infamous Ch. Catrana Eyeopener of Aricon and was out of one of Gary and Debby Poteat’s “Unaka” bitches who was a Ch. Banbury Barnstormer daughter. We took Ned to confirmation class and were encouraged to show him. Ned finished his championship at 16 months of age and we were hooked.

In 1990 we began our search for a foundation bitch. We talked to several breeders and were on the list, but something always came up and nothing was available. I attended a BT Specialty in Chattanooga along with my friend Debby Poteat, who introduced me to Jay Remer of Bedrock Bull Terriers, to whom she explained our search for a foundation bitch. The next morning after I returned home to Florida, I received a call from Winkie Mackay-Smith of the renowned Banbury Kennel. She had a bitch for us! In just a short time we had our foundation bitch, “Piper” who became Ch. Banbury Bittermint, CGC and is behind everyone we have bred.

In 1995 we went back to PA to Windfall Kennels to breed to “Brian” Ch. Windfalls Starman Of Bedrock, ROM. This breeding produced three champions. One of these champions sired our 2004 BTCA Brood Bitch of the year. The other produced top winning dogs for us as well as other breeders.

In 1996, we decided on a breeding from a half sister brother mating which was not readily performed by most breeders here in the U.S. We took a “Piper” X “Marcus” daughter, Ch. Glentoms Brushpopper, to a “Piper” X “Brian” son, Ch. Glentom The Stargazer. This produced “Morgan” Ch. Glentom Doublemint O’Berkshire, who earned the 2004 BTCA Brood Bitch Award and BTCA Brood Bitch Emeritus Award by her ROM champion get sired by Ch. Stellar’s Southern Cross, ROM. One of these, “Niblet” Ch. Glentom Fancy Mint, ROM, was BOS at the 2005 National Specialty, tied for AKC top producing white Bull Terrier in 2008 and produced the 2009 #1 colored Bull Terrier, Ch. Glentom I Have No Commint, ROM. One of the other sisters, “Meagan” BISS Ch. Glentom Mint Julep, ROM produced the 2010 #1 colored Bull Terrier All Breed and 2011 Westminster KC breed winner “Maeve” GCh. Glentom’s You Were Mint For Me, ROM.

In 2002, we purchased a white male Bull Terrier from England, “Marshall” Ch. Elcornijal AM Silver Star. He was sired by one of the top winning Bull Terriers in England at that time, UK Ch. Kenzed Prince of Darkness At Denpower.  “Marshall” proved to be a very pre-potent stud dog and was the 2007, 2008 AKC top producing white Bull Terrier. He earned the BTCA Stud Dog Emeritus Award in 2008. In 2008 we bred one of our “Marshall” daughters to the well known UK/AM BIS BISS Ch. Dazlin Defiance, ROM. This mating produced the white dog, GCh. Ch. Lebeouf’s Beaucoup Blanc Of Glentom, ROM, the 2010 Reserve White Bull Terrier at the BTCA Silverwood Trophy Competition and Award of Merit and Select at the BTCA National Specialty. This mating also produced the red bitch, GCh. Ch. Glentom Lebeouf Countess Singing Cloud, ROM, Best of Breed at Morris & Essex and Montgomery County KC shows 2010.

In 2008, with our friend and co-owner Amber Gibson, we imported a white male from Scotland, “York” Am. Ch. Cool Conquistador At Crossgarley. His sire is the well known UK Ch. Nosrettap Celtic Star of Kilacabar #2 top producer 2007, who is sired by the top producing UK Ch. Alecto Kool Barracuda of Kilacabar #1 top producer in 2007. “York’s” first litter produced three champions, one of which is currently the #1 white Bull Terrier All Breed, the 2nd litter two champions, one of which is “Maeve” GCh. Glentom’s You Were Mint For Me, ROM #1 colored Bull Terrier All Breed 2010 and 2011 Westminster Breed winner, earning him the AKC top producing white Bull Terrier 2009.

We have also been long time supporters of rescue. In 1992 hurricane Andrew hit the Florida coast and we were called on to foster a lost Bull Terrier……consequently named “Andrew”. His owners were never located so he was adopted out through the Bull Terrier Best Friends Rescue of South Florida. We continued to work with that group and the BTCA Welfare Foundation in helping re-home displaced Bull Terriers. In 1998 Tom and I were asked to co-chair the BTCA’s Rescue Committee. We held that position from 1998 – 2003. I took over again in 2006 and am currently the chair of the newly formed 501c3 Rescue Welfare Trust Fund of the Bull Terrier Club of America.

We continue to strive to breed top winning, healthy Bull Terriers who live long and happy lives in their homes. As mentors, we enjoy bringing new owners and eventual breeders into the fold.  We believe that encouraging others to develop sound breeding practices will lead to success in the ring and help to educate the public on this wonderful breed.